08. Excuse Me, Sir, Do You Want Me to Check on Your Wife?
"Excuse Me Sir" es una de esas canciones en la cual sonamos como "Tom Petty and The Heartbreakers".

Veteran rockers Roxette keep on ticking ahead of local gig 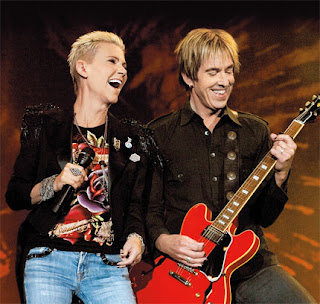 SWEDISH band Roxette will return to China, 17 years after their last visit in Beijing.

The tour will include a stop in Shanghai this time.

The rock band, which was formed 26 years ago by Per Gessle and Marie Fredriksson, is ready to hit Shanghai Grand Stage on March 14.

Gessle says they will basically do the same concert in Shanghai as everywhere else. Most of their hits like "It Must Have Been Love," "Listen to Your Heart" and "Fading Like A Flower" will be performed.

Gaining popularity since the late 1980s, Roxette was ambitious about conquering the world with pop music. With 33 chart-busting singles and total record sales of 75 million, the group thought it was safe to say "mission accomplished."

They still remember the "amazing experience" that was their first concert in China in 1995.

"We come from a very small country and were always impressed by the fact that foreign markets were interested in our work," says Gessle. "So, we just came."

Gessle still remembers some funny scenes. He says the police offered to protect them with guns in the first row of the venue, asbestos dust came down from the ceiling during the sound check. He also recalls eating some strange food at catering that they had never tasted before.

Nonetheless, by far the most memorable and impressive scene was the enormous amount of love and affection the musically starved crowd expressed toward the rockers.

The bank took a hiatus in 2002, when Frediksson was diagnosed with a brain tumor. They gradually staged a comeback after she recovered.

Roxette released the album "Charm School" last year and started its current world tour. "Charm School" is an extension of Gessle's song writing from the past few years.

"For me it's a very different Roxette album," Gessle says. "At the same time, it's custom made for Marie's voice. So I guess it's got that particular Roxette sound."

The band is working on a new album called "Roxette Travelling," which will be released in March.

It's an album made in hotel rooms, on sound checks, in live situations as well as in studios all over the world. According to Gessle, it's a fun record by a band who loves to play together.

He admits that pop and rock music has lost some of its influence today as there are many other entertainment options for kids, including computer games and the Internet.

He says it is harder for unique artists to come across since the entertainment industry is run by a few major companies who own everything from the arenas and record labels to computerized radio stations.

The music industry is famous for one-hit wonders and bands disappearing as quickly as they become famous. Staying in the business for 26 years is no easy feat.

"Of course we have changed a lot as persons since the 1980s," he says. "Outside of Roxette, we're living very separate lives just like we always did. I think that might be the secret why we still work together so well. There's no time to get tired of each other!"

Since Frediksson got ill in 2002, Gessle released six albums on his own, and toured extensively in Europe. He says he never expected Roxette to tour after she became ill.

"It is just fantastic that she is back," Gessle says. "And it is so flattering that the world still appreciates what we do. You can never take that for granted."

He says it doesn't bother him to be referred to as "that guy in Roxette," simply because he is that guy.

"I am a lucky guy with a ridiculous amount of success with my song writing and other projects," concludes the veteran rock star.